Teaching and Mapping the Geography of the Meuse Argonne Offensive: Geography is War, A Case Study of the Argonne Forest and the Lost Battalion

Essential Question: What was the experience like for a U.S. soldier during the Meuse-Argonne campaign?

The Argonne Forest loomed as an impenetrable fortress to the east of a landscape of rolling fields with small hills and heights, bordered by the Meuse River to the west.  When thinking of a forest, one might expect dense vegetation, poor visibility, and a generally difficult position to attack.  The Argonne proved more than just a forest.  Its uneven ground, sharp cliffs, ravines and streams were a barrier that would require fierce fighting to wrest from the entrenched Germans.  However, once past this barrier, the American Army could continue to roll through northern France to the borders of Belgium and Luxembourg. 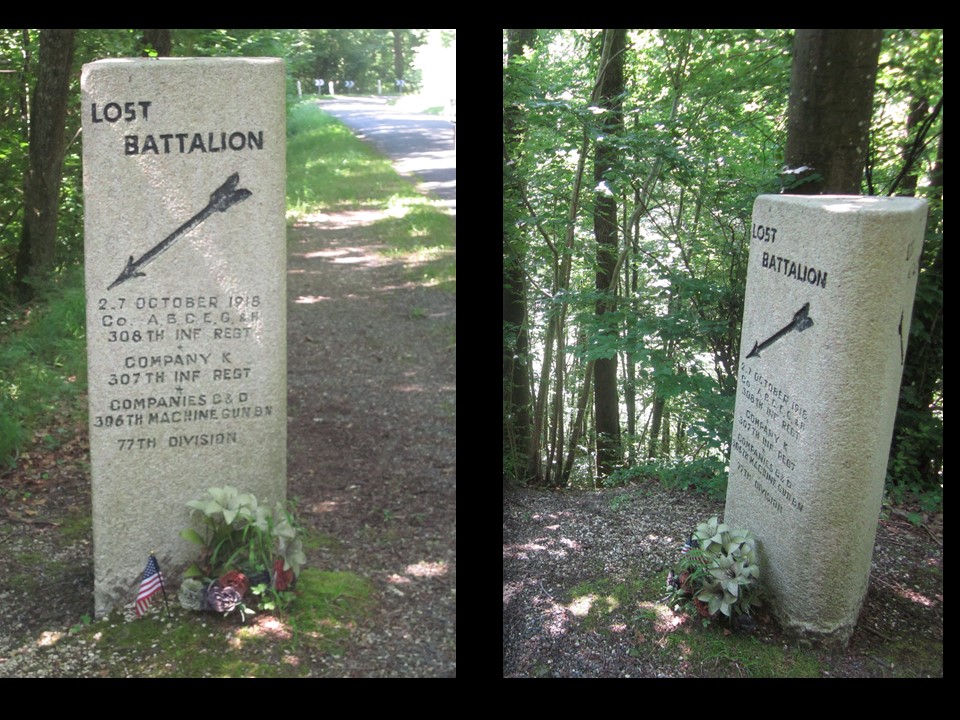 One of the instrumental divisions in the Meuse-Argonne Offensive was the 77th Division, sometimes referred to as the Statue of Liberty Division, as it was composed of mostly soldiers from New York City.  These men, all from varied ethnic backgrounds, represented the diverse culture of urban American at the turn of the century.  Mixed in with the New Yorkers were some soldiers from Montana and Wyoming, farm boys.  At first, the men took pride in their differences, however, soon when separated in a ravine in the Argonne Forest for five days, the men learned to work together in order to stay alive, and of course to maintain their position.  On September 26, the First Army ordered the 77th Division to advance through the Argonne forest, with the goal of regaining control of the area as a jumping off point to penetrate the other German lines. Additional American troops, joined by the French proceeded to drive north, through the Aire Valley, attacking into the Champagne region of France.  The Germans, however, held the heights of Romagne, Cunel, Montfaucon, and the heights above the Meuse River and were subsequently able to destroy many Allied troops moving through the region.  Because the heights of Romagne proved a difficult capture, it became more imperative to dislodge the Germans from the Argonne Forest.   The Americans had plenty of spirit and courage; it was training and experience that they lacked.  Most reinforcements in the region were recent draftees, and some had never fired a gun or seen a grenade.  Like the rest of the American commanders, Major Charles White Whittlesey’s First Battalion 308th Regiment was no different.  Whittlesey was a Harvard trained attorney, and he was quite successful, practicing banking law in New York City right out of school.[i]

Whittlesey’s new troops , like himself, were inexperienced and unused to the stress and trauma of war, and his veterans were tired.  However they pushed on, and at six am on October 1, 1918, Whittlesey’s First Battalion pushed forward through thick brush and tangled wires, old abandoned German headquarters, and dead bodies, all the while being constantly picked off by German snipers and machine gun nests.  The men’s objective in this region was a ridge north of the Charlevaux Mill road. [ii] 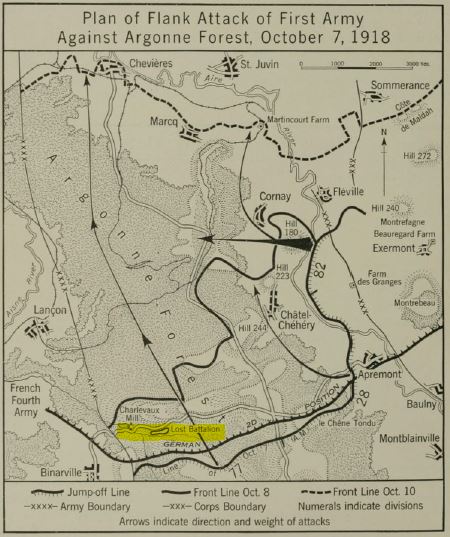 Whittlesey’s battalion advanced to a ravine within 600 yards of the Charlevaux Mill Road before encountering severe German resistance.[iii]  The unofficial strategy of the American commanders at this time was to push forward at all costs.  The Lost Battalion was just following orders and found itself in a wooded ravine, surrounded by hostile Germans by the evening of October 2.[iv]

The ravine rose at a steep slope of more than 30 feet, and at a 60 degree angle to the men’s objective, Charlevaux Mill Road.  Above the road was a steep embankment and above that rose ledges and slopes.[v]  Like most commanders, Whittlesley employed a runner system in order to communicate with the troops on his flank and to his rear.  In a runner system, one runner would carry a message part of the way to its final destination, handing it off at a designated spot, in hopes that the message would get through to its recipient.  However, the runners of Whittlesley’s battalion quickly fell victim to the enemy.  Whittlesley then was left with a few carrier pigeons as his only means of communication.[vi] 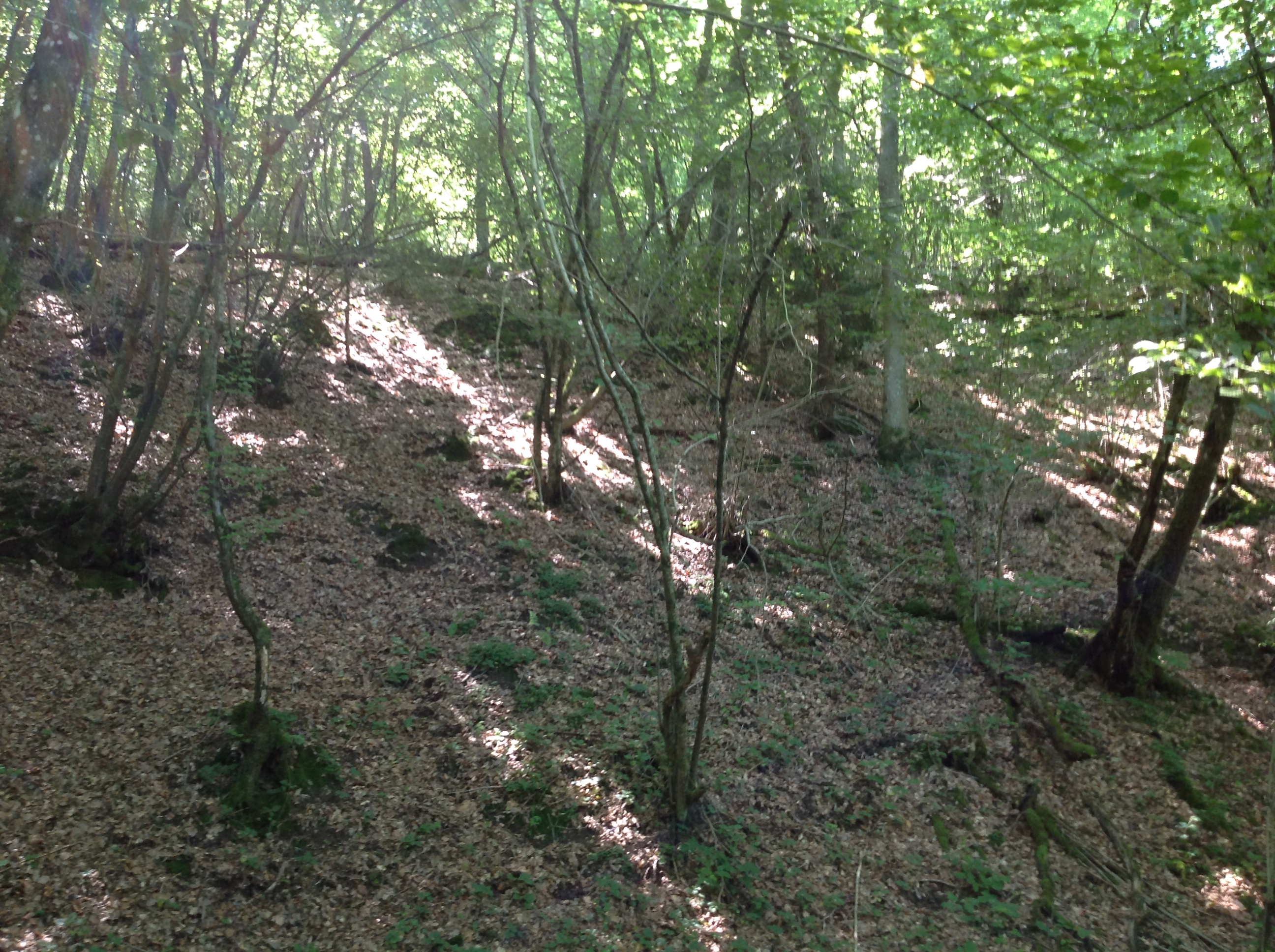 At this point, the men dug into the side of the ravine and waited for the reinforcements from the rear.  (Fig. 38) Whittlesey and his men had found themselves in terrain that was defendable, yet still faced constant harassment from Germans in all directions.    The foxholes or “funkholes” that protected them grew deeper every day.  Yet while the Germans never stopped trying to dislodge The Lost Battalion from its position, they were more concerned with the large number of American and French troops amassed to its rear.  Rations in the area occupied by the Lost Battalion were in short supply, and soon the only available water would come from a muddy creek, guarded by German snipers and machine gun nests.  The men were starving and suffered extreme fatigue and thirst.  Ammunition was also dwindling quickly, and the battalion was completely cut off from any supply routes.

General Robert Alexander received a message from Brigadier General Evan Johnston regarding the Lost Battalion.  His alert was met with the message “congratulations.”  Again, General Johnson called Alexander to alert him that Whittlesly’s men were in danger of becoming cut off from the rest.  Alexander was nonplussed.  He was receiving positive reports from other regions and assumed that there were men in the area to protect Whittlesley’s flank.[vii]  As The Lost Battalion continued to stay alive and maintain their position, the men remained isolated from reinforcements for days.  With the runner system and phone systems down, Whittlesey finally turned to his few carrier pigeons to deliver his important messages.  He sent three pigeons to headquarters containing desperate messages regarding the perilous situation of Whittlesley’s men.  He also requested assistance from the American artillery.  In the meantime, “there were long period of time, when all one did was lie there and hope nothing made a direct hit in your particular funkhole.” [viii]

By nightfall on October the 3rd, twenty-five percent of Whittlesley’s force had become casualties.[ix]  They had no medical supplies and no one that was qualified to render medical aid.  Despite all of this, Whittlesley and his men continued to hold their position, refusing to surrender or withdraw, while the First Army continued to attack the German second, and strongest line, the Kriemhilde Stellung and meet their goal of “unhinging” the Germans in the Argonne.[x] As the battle wore on, reports of the dire situation of the Lost Battalion began to reach the rest of the I Corps, posing a potential dangerous blow to American morale.  To learn the tale of the Lost Battalion, isolated in the face of continual attack, could knock the wind of out of the most courageous and enthusiastic soldier.

Whittlesley’s fellow soldiers and commanders continued to move forward in the face of a stiff German defense.  A commander of the 308th had a nervous breakdown, writing “I do not believe that at any time during the fighting in the Argonne Forest, the Brigade and Division Commander had a correct appreciation of the enormous difficulties encountered.  I could tell from the impatient and unreasonable messages and orders I received that they had no idea of the actual conditions.”[xi]  Some of the men deep in the forest believed that Alexander was “completely out of touch with the front.”[xii]  As his troops continued to suffer, Whittlesley sent more messages to headquarters alerting them to the extreme situation of the Lost Battalion, and that they had no way to protect themselves from the grenades, mortars and snipers.

By mid-afternoon on October 4, the Lost Battalion heard the sound of shells beginning to land on the southern slope of the valley.  The mens’ hopes soared, as they thought the sounds were coming from American artillery, attacking the Germans behind them. In time, Whittlesley realized that the Americans were hitting their own men, the Lost Battalion, with American artillery. [xiii]   The Germans chimed in with their own shells as well, and Whittlesley was forced to send his last pigeon, Cher Ami with the message “Our artillery is dropping a barrage directly on us.  For Heaven’s Sake stop it.”[xiv]  The barrage eventually ended at 4:20 pm.  Apparently Cher Ami had delivered his message.  (Cheri Ami is stuffed and on display at the National Museum of American History. ) 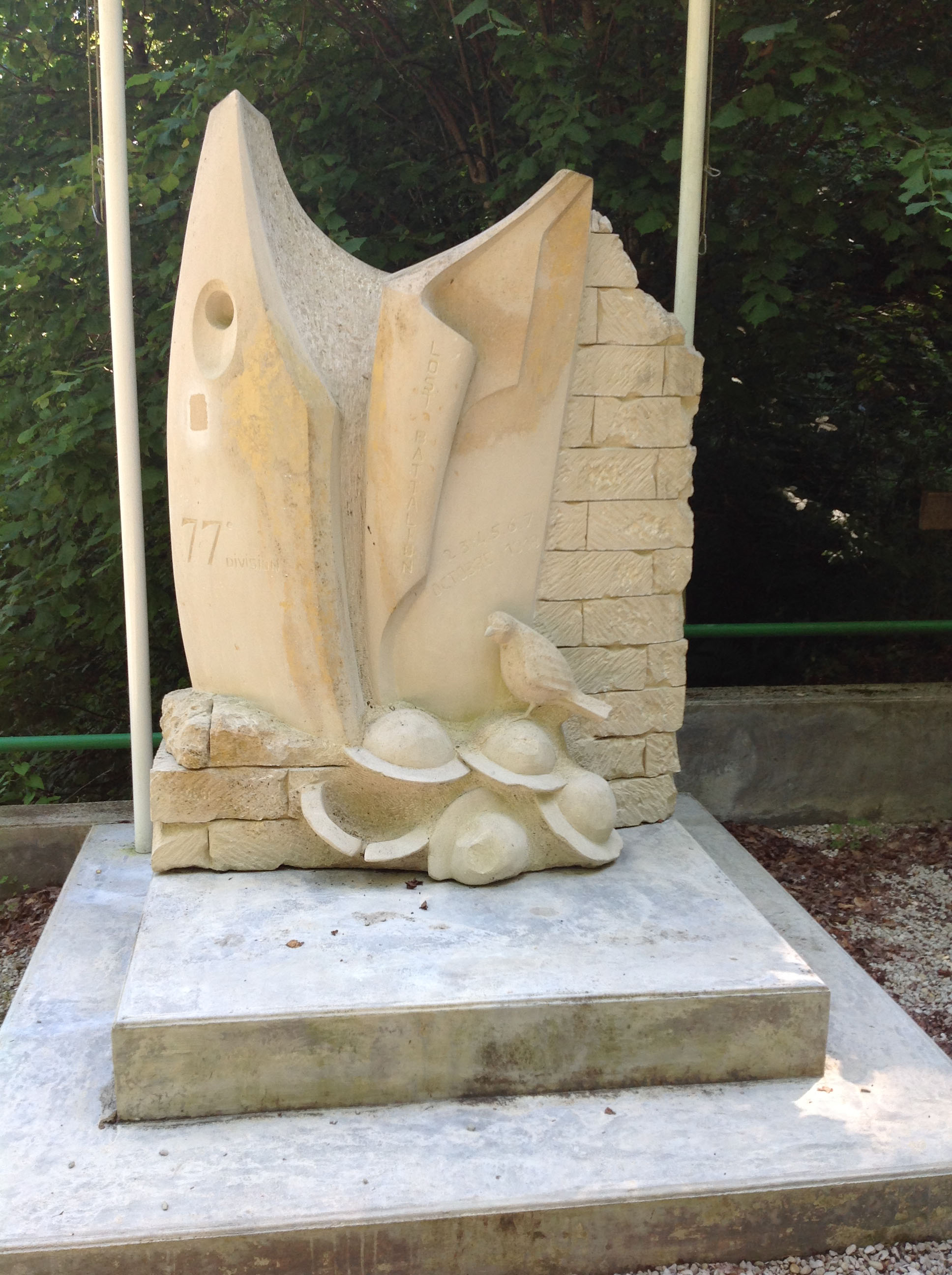 The men of the Lost Battalion survived for five days in their isolated position and were constantly barraged by German machine gun fire and other weapons.  However, they were able to survive, and finally the Americans were able to push west through the Argonne to force the Germans to abandon the front facing the 77th Division.  On October 8, reinforcements reached Whittlesey’s unit.  Of the more than 600 men trapped in that deadly ravine, 190 were physically able to walk out of the woods, 190 were wounded in their positions, 110 were dead and 60 missing.[xv]  Yet it was ultimately the ravine that saved them.  The position protected the men enough from German mortars to prevent total annihilation.  Concerning terrain, the Lost Battalion had favorable conditions to defend itself.   The question is then, did the Lost Battalion survive due to human heroism and strength or because of the terrain before them?  Although the event was not of major military significance in the Meuse-Argonne Campaign, the rescue of the Lost Battalion was certainly a success for American propaganda and for the for the soldiers’ morale.

NEXT SECTION 5– A Virtual Field Trip: The ABMC monuments and Meuse-Argonne Cemetery

PREVIOUS SECTION 3– Where? Why There?